How much will property prices drop in a recession? 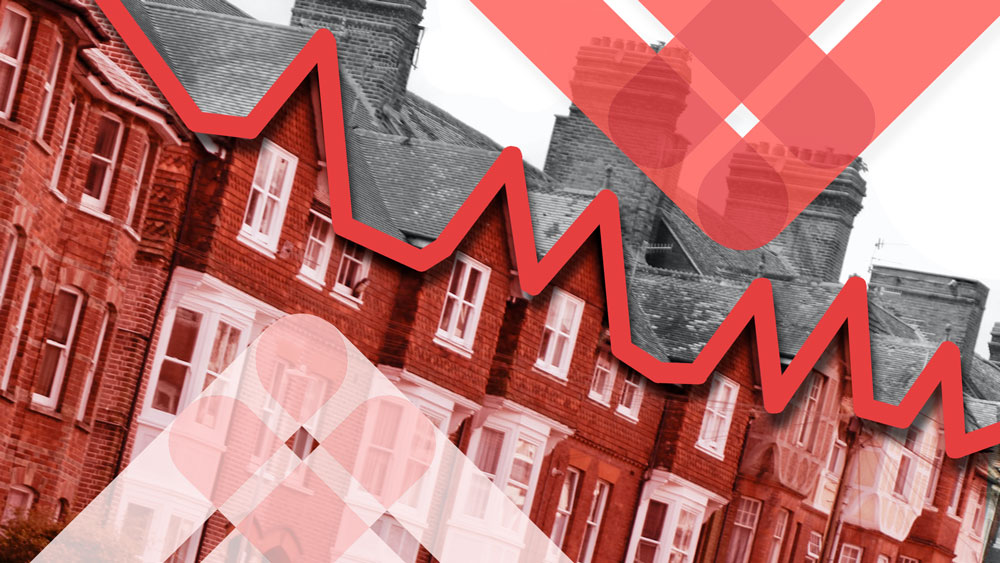 It helps to split this question down into three things; the stock market, the property market and the economy. While these three things are obviously linked, they don’t move in lockstep.

What is a recession?

Let’s start at the start and make sure we know exactly what we’re talking about.

A recession is defined as:

A period of economic decline during which trade and industrial activity are reduced, generally identified by a fall in GDP in two successive quarters.

So a recession is solely measured by GDP, Gross Domestic Product. GDP is basically a single number to try and quantify everything that happens in an economy over a three month period.

The important point to note here is that a recession is something that happens to an economy as a whole. Property is part of an economy, but there are lots of other parts.

How did the last recession impact property prices?

Yet, despite this precipitous fall in the economy, the property market boomed. And unusually, the reason property prices were supercharged was the very thing which caused the economic recession.

But being housebound (especially with children suddenly being home schooled), caused people to look around and revaluate the space they were in. Which was natural, at some points during lockdown there was nothing else you could look at for 23 hours a day aside from your home. This apparently led to a very widely reported ‘race-for-space’ as people who could afford to begin snapping up properties with gardens and more room for home offices.

How did the last recession impact the stock market?

In America another intriguing thing happened as a response to the pandemic. The government issued stimulus checks to help people get by. But an unusually large number of people decided to throw the money into the stock market.

It may have started in America, but one of the many things the pandemic taught us is that we live in a global world, and trends travelled (even as people couldn’t).

This was exacerbated by the fact that people had more time at home to think about investing, read stories about investing and actually begin investing – while simultaneously responding to the economic uncertainty of the pandemic.

The sudden unreliability of the regular wages we’d become accustomed to led to some people trying to take control of their own finances.

The point here is to illustrate that the economy, stock market and property market are linked, but they don’t necessarily all move together. In the extreme example of the pandemic, economic disaster actually led to bull stock markets and booming property prices.

Here’s a graph showing just how divergent the stock market and economy became during the pandemic: 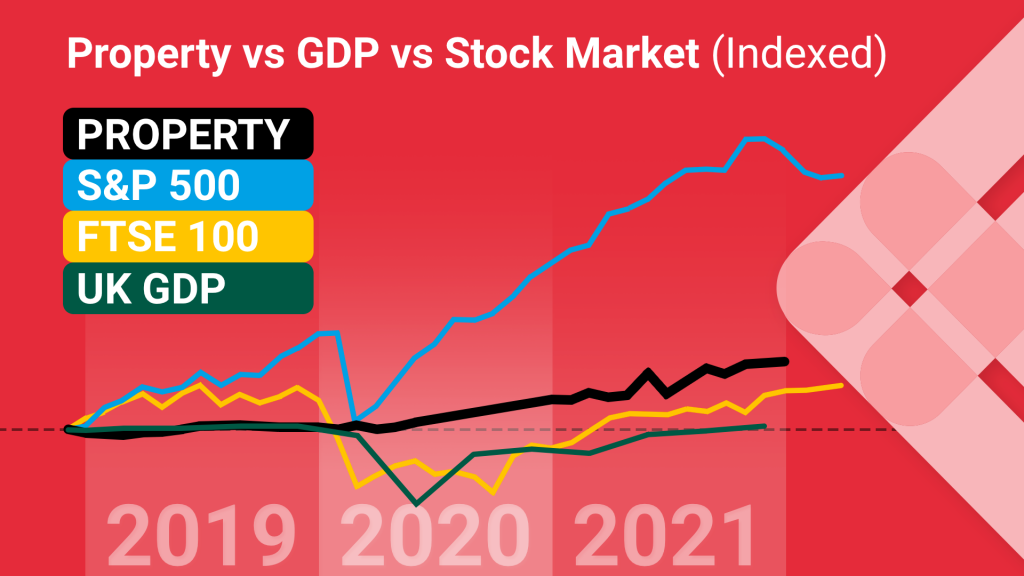 Looking at the graph we can see, FTSE 100, S&P 500 and UK GDP all took a big hit at the start of 2020 – while UK property prices powered on almost as if nothing was happening.

The FTSE 100 recovered slightly faster than GDP after a long wobble, but the S&P 500 skyrocketed at a much faster rate than it had been growing before the pandemic.

You may be looking at this graph and thinking, ‘I should be investing in the S&P 500 and not property!’ However, don’t forget that buying with leverage multiplies your returns and gives property a huge advantage over other assets.

How does high inflation affect the stock market?

Right now the world is facing inflation. Arguably also caused by the pandemic (but that’s a different story that we’ve covered in detail on a podcast).

The stock market trades on a mix of fundamentals and sentiment. The fundamentals are the underlying assets and profits of a business. Sentiment is how much people are willing to pay today for anticipated future profits. The intersection of these two drivers makes the stock market exciting – but also very hard to predict.

Inflation poses a challenge for businesses, as it puts pressure on what they charge for products and pay for supplies. This can put downward pressure on the stock market.

An even bigger challenge for businesses is rising interest rates. To grow and expand businesses need to borrow money. If you’re opening a new store, launching a new product, or even building a new online service – there are upfront costs to be paid before your venture can start generating income.

Even something as seemingly simple as hiring new employees comes with costs, like the costs to hire, equip and train. Expansion almost always requires more employees.

So, growth often requires borrowed money. Interest rates rising means borrowing money costs more. Rising interest rates cause businesses to expand slower. Because the stock market is driven by the perception of future growth – interest rate rises can affect the stock market. Rob Dix goes into much more detail about this in his book, The Price of Money.

Will interest rates go up even more?

The Bank of England has raised the base rate several times, and future rises are expected.

This slows spending by both consumers and businesses.

The base rate is rising of course and is likely to continue to do so. But presently the Bank of England seems to be following a strategy of incremental and highly telegraphed rises, meaning consumers, banks and businesses can slowly adjust and blunt negative effects.

But how does high inflation and high interest rates affect property prices?

A lot of the same issues with higher interest rates also apply to property because it’s an asset that’s almost always bought with borrowed money. Higher interest rates will make buyers more cautious as the cost of borrowing increases. This will probably lead to cooling property prices.

Cooling is different to falling though. It’s possible that property prices will keep rising, just at a less ferocious pace than we saw at the end of 2021 and through the start of 2022.

For property prices to fall there needs to be a set of specific circumstances.

– A huge shift in sentiment.

– Lenders need to be reluctant to lend.

– Lending needs to be much more expensive.

None of those things look especially likely at the moment in mid 2022.

Besides, there’s a final piece of the puzzle for prices to fall – you need forced sellers in the market.

Property prices are more stable without forced sellers because if demand drops supply can drop too. If the market is slow then people who aren’t forced to sell can just not list their property and wait for a more favourable market. This reduces the supply to match demand and keeps prices from falling. Prices start falling when lots of people have to sell and there aren’t enough buyers making supply outweigh demand.

Even if lots of people are forced to sell that might not be enough to bring prices down if lenders are still lending. However, sometimes the event that’s forcing sales also makes lenders reluctant and then prices will fall – as we saw in 2008.

Are we in a property price bubble?

A property bubble is notoriously hard to define from the inside – not that it stops people trying. If we are in a bubble we’ll only know for sure in the future looking back. But what we can say is that not all the elements of a bubble are present right now.

Property prices are high, and rising at rates which feels extreme. However, there are still some checks and balances in place on lending. So, we’re not seeing the 0% deposits or negative cashflow deals that preceded the 2008 crash.

The reason high risk lending is a concern is that it leads to forced sales, which as we saw earlier is a major factor in driving down property prices. 2008 saw the market flooded with people who had to sell – just as it became difficult to buy because banks stopped lending. When supply is high and demand is low, prices fall.

So, will a recession make property prices fall?

Not necessarily – as we’ve seen, during the pandemic the opposite happened. Throughout history there have been multiple recessions and stock market corrections where property prices didn’t fall. We’ve also seen stock market crashes that didn’t cause a recession and everything in between.

Of course what’s happened in the past, doesn’t necessarily predict the future. But this still is an important point to make because so many people are assuming property prices will fall based on their own past experience.

This is possible, but not guaranteed.

It comes back to those three elements; the economy, the property market and the stock market. They’re different but undeniably interrelated. A recession is measured by GDP, which tracks the economy, not the other two.

It’s natural that there will be knock on effects between these three interrelated concepts. The issue comes with the fact that a recession will be widely reported and interpreted as being conflated with property and the stock market. Meaning your job is to look at the actual signs of what’s happening in the property market, rather than what people are telling you will happen to the property market.

How do I start investing in property sensibly?

If we’ve convinced you that now is a good time to buy, and it almost always is if you’re planning on investing for the long-term, then here’s some next steps you can take:

Especially our course on setting your goals

Speak to Property Hub Invest for a free strategy meeting

Listen to the podcast for the latest property news

Head to the forum and speak to other investors

This is just a small selection of the free education we’ve spent years building and we’re adding more all the time!

When the property market will crash

Starting from scratch in property investment

Property prices don’t just rise by themselves. A number of factors cause property prices to increase, and it’s important to understand what these factors are and how you can use this knowledge to your advantage. Understanding and analysing property makes…